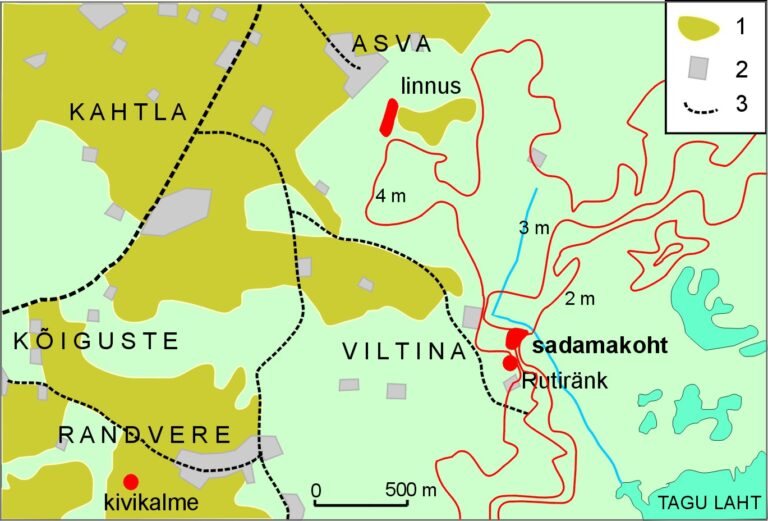 The southern coast of Saaremaa is well indented but flat, which is why there are not as many suitable locations for harbours as one may assume. A suitable area for landing was presumably in the vicinity of Asva, where quite deep buy reached inland, close to the arable lands. Here, at the site of the Bronze Age fortified settlement, another hillfort was erected in the 6th century and used until the 9th century. It was probably connected with a suitable harbour site somewhere in the vicinity.

The exact place of the 6th-9th century landing site has not been located near the Asva hillfort so far, but a harbour site has been found in Viltina, 1.2 km from it. The site was excavated and dated to the 11th and early 12th century. The Viltina Rutiränk stone grave was only 50 metres from the harbour site. Several other smaller graves were registered in the area, all predominantly from the period between the 11th and the 12th centuries. It is interesting to note that a toponym Linnamäe põld (Hillfort/Town Field) has been registered near the site. The local folklore remembered that the field near the stone grave once used to be “a real town”.

The Viltina harbour site was registered in 1999 and excavated 2004-2006 by Marika Mägi. The total area of the site may have been about 0.4 ha. Six excavations were conducted in different places, with the total area of 330 m². The largest excavation covered the western side of the harbour site, where remains of densely built light buildings, as well as several fire places came to light. The site had been surrounded by a fence with stone foundation, identified in several small trenches.

The coast had been dug steeper in at least three places. One of such artificially deepened places was excavated. Lines of stones along the slope, as well as some post places surrounded by stones indicated two piers that had been built at the distance of 4.2 m from each other. The area near the one-time piers had been cleared of stones. A small excavation there yielded few finds and hard-tramped soil, suggesting that the area was used for meetings.

The northern part of the harbour site was bordered by stone graves characteristic to the 11th-12th-century Saaremaa, where ordinary cremations, as well as two 11th-century cenotaphs, were uncovered during the excavations. Single cremations were also found between the building remains of the harbour site. An individual cremation inside an earthen vessel, very unusual for Saaremaa, came to light near the surrounding stone fence of the site.

In addition to the finds from burials, the Viltina finds mainly consisted of dress accessories, pottery, and animal bones. Over a hundred boat rivets or parts of them, as well as some weights and dirhams, were found. From a particular area with a diameter of about 6 m, numerous boat rivets, nails, some tools, and animal bones were unearthed and interpreted as the waste of a carpenter’s workshop.

The cultural layer of the site was generally very thin and, in some places, completely absent, which, together with the absence of oven remains, suggests that the place was used periodically. The most plausible interpretation of the Viltina harbour place is that it functioned as partly ritual, partly practical place of assembly where people arrived mainly by sea. 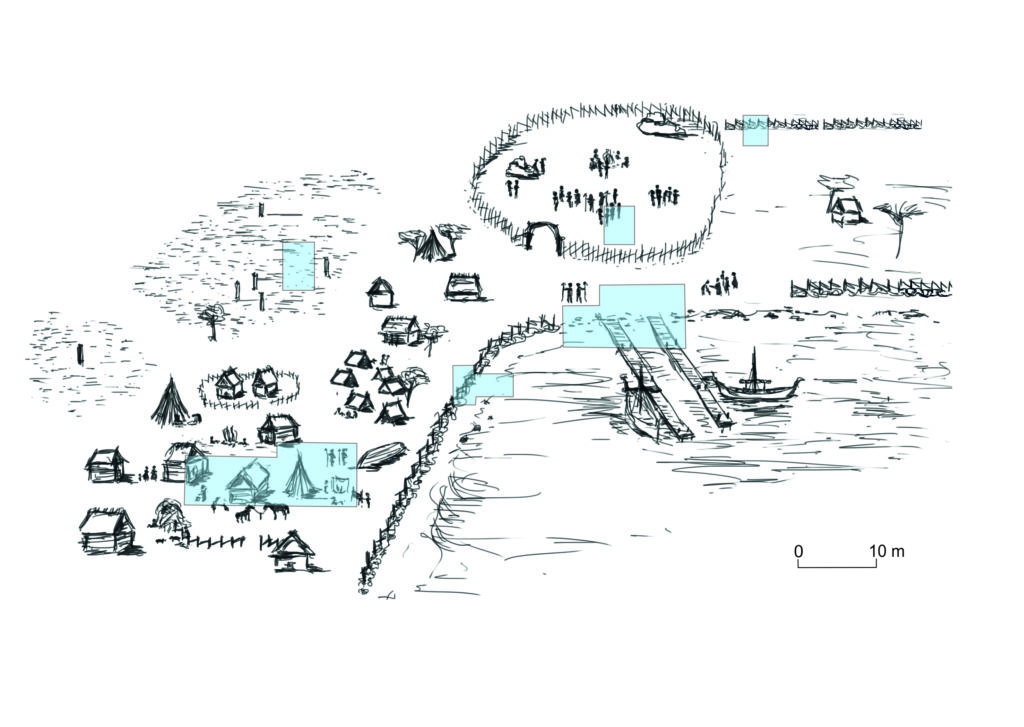